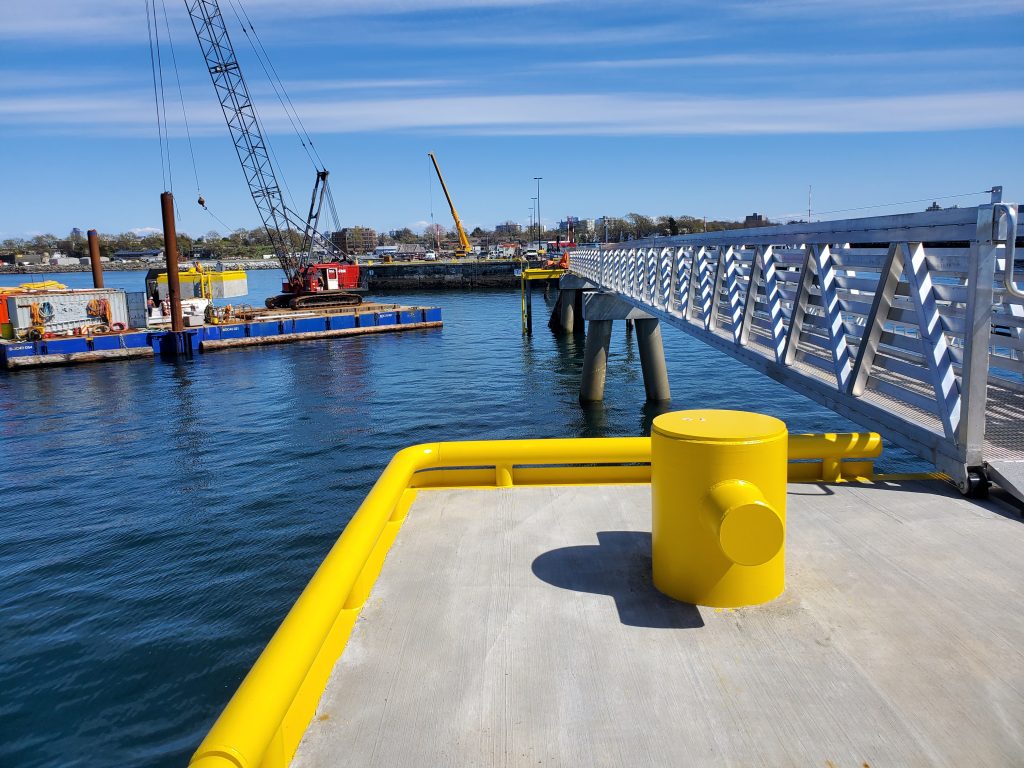 April 23, 2020, Victoria, BC, Canada – The 58-metre extension to the Pier B mooring dolphin at the Victoria Cruise Terminal has received final review from the engineering team, signalling completion of one of the largest infrastructure projects ever undertaken by the Greater Victoria Harbour Authority (GVHA).

Originally planned for completion in 2019, the project was delayed for one year due to the unfortunate loss at sea of the custom fabricated steel in December 2018. Despite the one-year delay the construction period took six months and was on schedule and within budget.

Construction was completed by Ruskin Construction, with more than 65 people including contractors, suppliers, engineering, and environmental managers required to work on the project. Placed into the seabed were two, 3-metre (10 foot) diameter coated steel monopiles with a combined length of 291 m (954 feet), together weighing approximately 96 metric tonnes. Two concrete platforms requiring approximately 150 cubic metres (196 cubic yards) of concrete, complete with reinforcement, cap the project at the surface.

The dolphin extension will allow for cruise vessels that are close to 350 metres (1,148 feet) long to safely moor in port when ship sailings resume along the West Coast. The structures are designed for vessels of approximately 225,000 gross tons.

Due to COVID-19, the sailing season has been delayed by Transport Canada until at least July 1, 2020. GVHA team members continue to engage with all partners on the reintroduction of cruise to the region, which will come only through guidance of health and federal officials.

The Victoria Cruise Terminal at The Breakwater District welcomed more than 700,000 passengers and 300,000 crew in 2019, including the inaugural call of the Royal Caribbean Ovation of the Seas, which will be one of the vessels to utilize the new mooring dolphin when sailings resume.

About the Greater Victoria Harbour Authority

Greater Victoria Harbour Authority (GVHA) is a not-for-profit organization that is committed to the stewardship and sustainable growth of Victoria’s dynamic working harbour. GVHA owns and operates several high-profile community amenities including The Breakwater, Inner Harbour lower causeway, and customs dock at Raymur Point. Within GVHA’s commercial and marine industrial holdings are The Breakwater District at Ogden Point, Fisherman’s Wharf, Ship Point, four Inner Harbour marinas, and the historic Steamship Terminal. GVHA’s management of the Victoria Cruise Terminal contributes more than $130 million annually to the regional economy and is responsible for 800 direct and indirect jobs in Greater Victoria. For more information, visit www.gvha.ca.